Michael Cohen, President Trump’s former lawyer, pleaded guilty earlier today to a charge of “false statements,” for lying to Congress about the extent of his and President Trump’s involvement in plan to build a “Trump Tower” in Moscow, Russia. Cohen falsely represented, in a letter sent to the Senate Select Committee on Intelligence and House of Representatives Permanent Select Committee on Intelligence, that 1) “The ‘Moscow Project’ ended in January 2016 and was not discussed extensively with others in the Company;” 2) “Cohen never agreed to travel to Russia in connection with the Moscow Project and ‘never considered’ asking [President Trump] to travel for the project;” and 3) “Cohen did not recall any Russian government response or contact about the Moscow Project.” In fact Cohen communicated with Felix Sater, a real estate developer with Russian ties, about the project; told Sater he would travel to Russia; addressed Trump about the possibility of Trump traveling to Russia; and communicated directly with Russian officials about the project.

Obviously this looks bad for Trump. The evidence of these ongoing communications with Russian agents strengthen the case for collusion/conspiracy to defraud in that it helps to establish, at least, that Trump’s confidant and fixer had strong ties to Russia while Trump was campaigning for office, and goes a long way towards establishing that Trump had such ties as well. While that doesn’t get us all the way to conspiracy to defraud, it certainly helps to bring us closer. One email written by Sater in November 2015 about the project may be damning. It read in part: “our boy can become President of the USA and we can engineer it.”

The Senate Judiciary Commitee’s probe of social media platforms uncovered data concerning the number of retweets Donald Trump and Hillary Clinton each received from Russian robots between September 1st and November 15th. While Trump received 470,000 retweets from the Russian bots, Clinton only received 50,000.  C-NET reports that Twitter has around 450,000 suspicious logins (possibly from bots) a day, and as such the number of retweets the candidates received is relatively insignificant. However, it does establish the Russian bots had a preference for retweeting Trump. Additionally, this preference cannot be said to be a mere reflection of the candidate’s rate of tweeting, as their daily average was more or less on par with each other.

This information falls far short of establishing collusion. Even if we could take the data to mean that the Russian government supported Trump, it does not show that Trump solicited said support. However, it does help to further establish Russian interference with the 2016 election. To look at the Committee’s complete report click here.

Senator Jeff Flake announced on Tuesday that he will not be seeking reelection, and this article, from Politico, says that could be good for the Republican party. Flake is a loud critic of President Donald Trump, and that hasn’t not won him friends in the electorate: he hasn’t gained Independent or Democratic votes, and has alienated Republicans in the process.

So, what does this mean for impeachment? It goes back to yesterday’s discussion of Trump’s relationship with the Senate. If Trump’s dissenters are pushed out of Congress, then impeachment chances suffer. It may be that the President will have to do something particularly egregious to make enough enemies in Congress for impeachment to become an actuality. 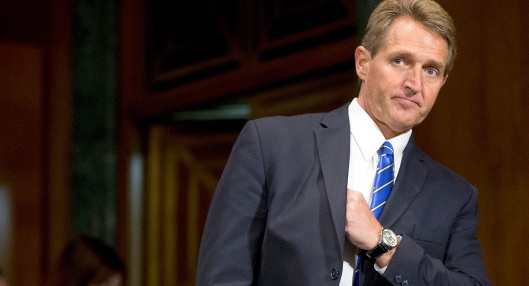 This article, from the Washington Post, elaborates on President Trump’s relationship with Republican senators, in light of a feud he had with Senator Corker over the tax code. The author references Trump’s shaky relationship with Republicans in general, citing specifically the tension Trump has had with Senate Majority Leader Mitch McConnell. However, amongst references to Trump’s spat with Republican senators, the article sprinkles in quotes from senators who are eager to hear Trump speak.

Whether President Trump has Republican support is an important question. Conviction in the Senate requires a 2/3 majority. However, I am not convinced that President Trump’s relationship with Republican senators is in fact a bad one overall. His attacks on McConnell make sense, since Trump protrays himself as an establishment busting populist, and McConnell represents the establishment. And his odds of support in the Senate may be improving. Sen. Corker is not seeking reelection, and meanwhile populist candidates are lining up to join the legislature. Therefore, it is far from clear that President Trump is going anywhere anytime soon.

Several days ago, I noted with dismay that a large majority of the Republican members of the House Judiciary Committee sent a letter to Attorney General Sessions calling for a second special counsel, in addition to Robert Mueller, to investigate alleged malfeasance by Hillary Clinton, Loretta Lynch, James Comey, and a grab-bag of other people and events associated in one way or another with the Democratic side of the recent presidential campaign.  I lamented this letter as both a transparent attempt to deflect attention from Mr. Mueller’s Russia investigation and a distressing instance of Republican participation in Mr. Trump’s assault on democratic norms.

A number of Republican senators have taken a quite different approach – proposing legislation that would make it difficult for Mr. Trump to remove Mr. Mueller.  Republican Senator Lindsey Graham and Democratic Senator Corey Booker are co-sponsoring a bill that would both prevent dismissal of a special counsel absent good cause and make such a dismissal reviewable by a panel of judges.  A similar bill co-sponsored by Senators Thom Tillis, R-N.C., and Chris Coons, D-Del., would allow a special counsel to challenge his removal in court.

I have two reactions to these efforts:

First, I am heartened that Republicans in the Senate are taking a far more responsible position than their House colleagues toward Congress’s constitutional obligation to monitor and check executive wrongdoing.    Whether Mr. Mueller ever finds evidence of serious malfeasance or not, these Republican Senators give one hope that bare partisanship has not utterly neutered at least one half of the national legislature.

Second, having said this, there are real doubts about the approach adopted in these bills. In important respects, both bills would be a reversion to the now-defunct post-Watergate independent counsel law.  It is widely agreed that the degree of autonomy conferred on “independent counsel,” the monocular focus of such investigations on a single target, the immense resources made available to ICs, and the breadth of the federal criminal law too often meant that ICs ventured far afield from their original mandate, digging and digging until they found some crime, however inconsequential.  That law was allowed to lapse after the Clinton fiasco for a reason.

I wholeheartedly support the notion that Congress should signal to Mr. Trump – and strongly – that it will not tolerate either a premature dismissal of Mr. Mueller or efforts to obstruct his investigation.  But it is not at all clear that the signal should be sent in the form of a statute – a law – that will persist beyond the current crisis and is quite likely to come back to bite us later.

I am therefore in some sympathy with former White House Bob Bauer, who argues that the appropriate congressional response to a firing of Mueller should be the initiation of impeachment inquiries employing its own undoubted investigative authority.  That said, while Mr. Bauer’s criticism of both the old Independent Counsel law and the proposed legislation seems spot on, one cannot but wonder how likely formal impeachment proceedings or even serious preliminaries to a congressional impeachment investigation are given the current composition of Congress.  Here, it is particularly important to note that any impeachment inquiry must begin in the House, and customarily in the very Judiciary Committee whose hyperpartisan disposition has been on recent display.  Mr. Bauer, to his credit, tacitly concedes the improbability of a prompt move to impeachment, but notes that the Senate at least has sent other kinds of disapproving signals to the White House, included pointed indications that it might not consider a replacement to Jeff Sessions if he were fired as a means of getting to Mueller.

I am less impressed with Professor Rick Pildes’s suggestion that Congress could attempt to forestall Mueller’s firing by codifying existing DOJ regulations regarding special counsel.  As I pointed out in Slate some weeks ago, those regulations would not prevent Mr. Trump from firing Mr. Mueller if he is determined to do it.  They create some procedural hurdles, but a president already determined to endure the political damage such a firing would entail could surmount those with ease.  If he is determined to fire Mueller, he’ll just dismiss Attorney General Sessions and then work his way through the DOJ hierarchy until he finds someone willing to issue the order.  The regulations will have been satisfied and Mueller will be gone. Turning the current regulations into statutes would do nothing to change that calculus.

Professor Pildes’ proposal might serve one salutary function.  Perhaps bicameral endorsement of DOJ standards making firing a special counsel difficult would signal to Mr. Trump that Congress as a whole would seriously contemplate impeachment if he fired Mueller.  But, again, the House of Representatives would have to vote in favor of this legislation.  And at present, that is hard to envision.

Still, one should take some solace in signs of the Senate’s slow awakening to its constitutional responsibilities.

Find here an analysis of the Comey Senate testimony and it’s potential effect on Trump’s presidency.